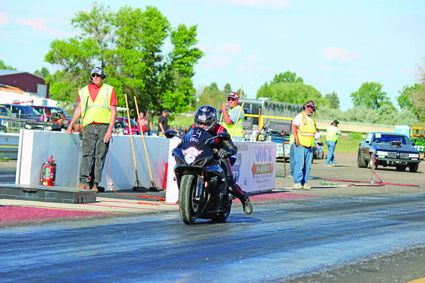 The first of the six Hi-Line Dragstrip racing events is now in the books. The racers hit the starting line last Saturday and Sunday for the first official Phillips County Motorsports event of the year.

The summer series, put on by PCMS started with a bang or a few thanks to Brad Janishewski's Fire 4 Hire crew.

The crew ran Jet-fuel powered cars Mater, who is inspired by Tow-Mater from Pixar's Cars movie and Secret Weapon that resembles a fighter tank.

Steve Neiffer of Havre was the winner of the Box Super Pro Class with a dial in time of 5.49 seconds and a finishing time of 5.53. Runner up was Havre's Shane Christiansen who dialed in a time of 6.13 and finished with a time of 6.23.

Malta's Kaden Bergos was winner amongst the Junior Dragster class with a dial in of 8.01 and a finish at 8.30.

Among the junior racers was eight year old Hayley Vipond of Saskatchewan, who raced in her dragster named Hayley's Comet during the event.

"I'm excited," Vipond told the PCN before her race.

Being in her second race ever, Vipond admitted that she wasn't nervous about the eighth-mile race at the dragstrip.

She fell in love with the idea of junior racing after watching her close friend Rayce.

Her father, Dustin also races and has raced at the Hi-Line dragstrip for the past seven years, which means racing is in Hayley's blood.

She had never driven a car or any other vehicle before her first race the weekend prior to the PCMS races.

It does help to have a father and a friend that have hit the track before.

Shelley, Hayley's mother was thrilled that her daughter has picked up racing.

"I'm excited for her," Shelley said. "Last weekend we raced at home and she did really good for her first time as a junior. She's been watching her dad race for the last seven years so I think she's ready and she's excited to run this weekend."

"That was her first time in a junior dragster," Shelley said.

Hayley did not seem too confident in her performance at the school.

"It was okay," Hayley said.

She knew she could do better, but young Hayley was a little timid, being that she is new to the sport.

She knew that in order to do better she had to have more confidence.

"I need to step on the pedal all the way," Hayley said.