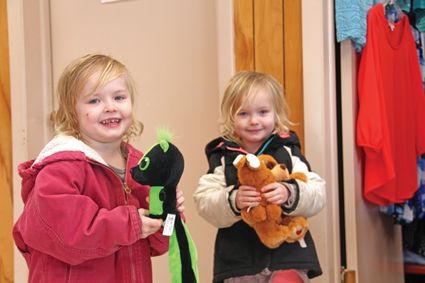 Malta twins Trinity and Adalynn Evans find toys to play with at the Malta Food Bank last Thursday afternoon. Through the charity of Phillips County residents and grants, the Food Bank and Angel Programs helped hudreds of people during the Christmas season again this year.

Families in need this past holiday season didn't need to look very far as the Malta Food Bank and the Angel Program once again came through for them during Christmas.

Malta Food Bank's Carol Schumacher reported last week that the number of canned goods donated to the facility totaled nearly 2,000 pounds in December and a total of $1,500 in cash donations were made (though she was quick to point out that many donations were made ahead of December as the Food Bank teamed with Town Pump again this year in that companies yearly fundraiser.)

"I would say we had a total of $4,500 between donations, grants and those types of things," Schumacher said of the last two months of 2018.

A total of 80 Christmas baskets were given out from the Food Bank.

As for the Angel program, in which local children are given Christmas presents, Valene Benson said that a total of 40 children were given gifts that were either purchased with donated money or the gift giver shopped for the children. That program caters to children ages newborn to 17.