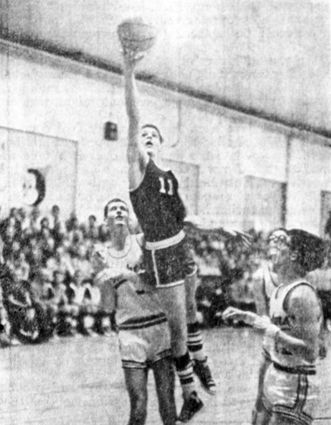 Penguins are conference champs... Alan Wasson, Whitewater's top scoring ace goes past Rocky Tollefson of Saco, for another two points in his 33-point barrage against the Saco Panthers in the conference championship game in Saco last Saturday night. Tollefson, the 6'5" Panther center, was the second high scorer of the game with 22 points. 1969.

Mrs. Fred Messerly, Lee, Vernon, and Arthur received burns in an explosion at their ranch home south of Malta. The explosion occurred when an attempt was made to light a fire with what was thought to be kerosene but turned out to be gasoline.

A son was born to Mr. and Mrs. Albert Ulrich of Phillips.

Harry Austin was among several servicemen who had returned from camp.

The board of directors of the Malta Commercial Club were to be hosts to farmers who attended the farmers in...