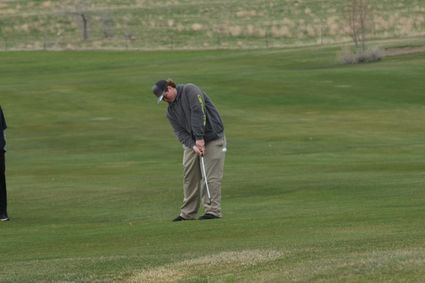 Malta's Hayden VanWichen had his second chip-off in two days.

The Malta Athletic Club Golf Invitational Meet was cold, windy, and featured occassional spouts of drizzle but teams held on to complete the event.

"It's sad we didn't have this meet last year but we are glad to have it this year," senior Grayson Waters said. "Too bad the weather isn't better but we are happy to be here."

Waters and sophomore Hayden VanWichen, who both scored 99, and were pitted against each other in a championship chip-off round. Waters won the 35 yard chip at hole nine, which earned him his first Malta Meet victory.

Waters had never been in a chip-off situation prior to his chip which left his ball roughly six feet from the hole.

"I was pretty nervous," Waters said. "I hadn't been chipping that well most of the day, so I figured I would play conservatively, as close as I could without being too fancy. I chipped it a little soft but it played pretty good."

Being that Waters is only a month from graduation, he shared what it meant to him that VanWichen and the other underclassmen were improving.

"It makes me pretty happy," Waters said. "It's good to see these young ones come up, especially seeing a sophomore golfing 90."

Senior Reba Doucette was the highest placer for the M-ettes earning fourth place by posting a score of 104 strokes. Fellow senior Kloie Marks posted a total of 108.

The PCN caught up to Marks at her sixth hole of the day.

"It's going pretty good but I don't want to jinx it," Marks said.

Marks reached par at Hole #1, a hole that she has birdied in past outings.

"It's been pretty amazing so far," said White, a freshman, when asked how her first year was going. "I like just how individual this sport is and the focus needed during it."

White shot a 144 at the Wolf Point meet, the first meet of the season. Though her stroke count was higher in Malta, she explained that she was more comfortable golfing at her home course.

VanWichen tied for first at the Glasgow Meet on Friday, April 26, and lost in the chip off. Ezra Judd placed tenth in Glasgow.

"It was a nice day for golf and it stayed dry," Coach Somerfeld said of the Glasgow meet.

VanWichen had ended his first half of the Malta meet with a chip over 30 feet that nearly went in the cup. After the chip, VanWichen was asked how his second year of high school was going.

VanWichen also mentioned that he had been golfing more in the off-season with his father Ward VanWichen.