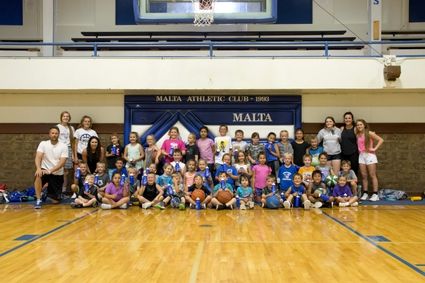 The annual event put on by Tia Stiles and Caitlin Anderson, is a fundraiser for the City of Malta's Department of Parks and Recreation youth basketball program and since it's first run in 2018, the Peewee Summer Slam has raised $2755.

"The thing that we are really excited about is that we advocate for Phillips County youth sports," Anderson said. "We are going to be able to buy additional hoops for them, pinnies (jerseys), basketballs, and other things that they are going to need for the program."

This year's event featured a camp as well as a tournament broken up into eight groups. Preschool- Kindergarten, First Grade, Second Grade, and Third Grade. Each age group featured a boys and girls bracket. There were sixteen teams total.

"I thought it went really well," Stiles said. "We had a few more teams than we had a year ago. It was really nice to have the community come together."

Stiles felt that a majority of kids interested in the sport of basketball were present and Phillips County was represented well. The event had teams from Malta, Whitewater, Saco, Harlem, Turner, Glasgow, Helena, and Custer.

The event had several coaches, helpers and referees consisting of former and current high school basketball players from around the area. Two of the coaches were the fathers of Anderson (Larry Smith) and Stiles (Alan Love).

"That is the awesome thing about Phillips County; everything is a family affair," Anderson said. "I think it is really exciting to see that Malta is not dying, it is thriving."