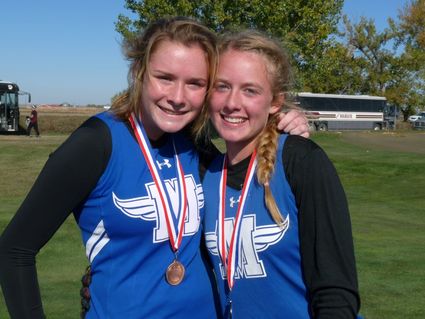 Jillian O'Brien and Leslie Young both medaled at the Harlem meet last Friday.

The overall winner of the high school girls' race of 25 runners on a very crispy cold autumn morning was L'Tia Lawrence who ran her last home cross country meet at the frosty Harlem Golf Course with a speedy time of 19:20. Teammate Taya Trottier ran to a second-place finish with a time of 22:02. And third-place honors went to Wolf Point runner Hermyanie Campbell who ran in with a time of 22:42.

Malta was the only team to field a full team for scoring and placed first with a score of 60 points. Other teams who participated were Poplar, Wolf Point, Dodson, Whitewater, Box Elder, Shelby, Hays-Lodgepole and Harlem.

The Mette cross country team found themselves on a warm bus headed west for the Harlem Invitational Cross Country Meet on a very cold autumn morning, where temperatures were more like a January morning than an October one. The frosty white golf course and the cold temperatures of the early fall morning awaited us as we prepared, with all manner of winter gear, to make our way to the start line for the walkthrough with the rest of the teams prior to the race. The boon for us was that the sun was shining brilliantly and warmed us up and began to melt the frost before the high school girls' race would begin. Following a presentation of the senior runners from Harlem and the playing of the national anthem by the Harlem High School pep band, the twenty-five runners who stood on the start line, shivering with anticipation and cold, dashed off at the sound of the gun.

The M-ettes ran well over the golf course, which they hadn't run on in a couple of years. The Harlem meet of the previous year had to be held at the Fort Belknap bike trail due to the soggy conditions from an early season storm that hit the region. But this year the course was great, despite the chill, and several ran some of their fastest times of the season. 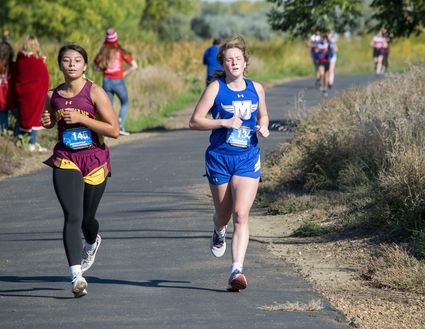 Kaycee Bond, Kirsta Meisdalen and Izzie Hallenberg ran close to each other, pushing each other along, passing one runner at a time, each one having a great kick at the end and placing within seconds of each other. Danie Rhodes, looking much stronger, had a great run and ran her fastest time this season.

"The girls have been working hard at practices and their work has been paying off," Coach Thea Solberg said. "We still have two weeks left to fine-tune things and get mentally prepared. This was a great meet to participate in. The competition was good and all the runners that participated Friday got some good experience running on a grassy golf course and that will be a boon, as they head to the State Cross Country Championships that will be held at the Eagle Falls Golf Course in Great Falls on Saturday, October 26."