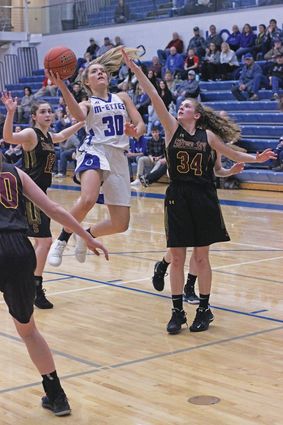 Addy Anderson goes up for a layup in Malta's win over Shelby.

The Malta M-ettes have a huge test in front of them on Friday as the team is set to take on the 9-0 Harlem Wildcats on Friday, January 24, in the Malta Gymnasium.

Though the M-ettes lost to Harlem earlier this season on Friday, December 20, 2019, the team has been the closest to defeating Harlem losing 48-47. The Wildcat's second-closest victory was a seventeen point win over Glasgow.

The game against Harlem is scheduled to start at 6 p.m. on Friday. The M-ettes will then travel to Poplar to take on the Poplar Lady Indians, who the M-ettes defeated 75-32 on Saturday, December 21, 2019.

Last week the M-ettes split games, losing to Glasgow 56-40 in Glasgow on Friday, January 17 and then defeating Shelby 51-33 in Malta on Saturday, January 18.

In their win over Shelby, the M-ettes started the game with a 9-0 run. Justine Lamb led Malta, scoring 13 points off of the bench. Lamb led a bench squad that outscored Shelby's bench 24-2.

"We worked hard on defense and on offense," Freshman Allie Kunze said. "We strode as a team and that's how we succeeded."

"I am just kind of hoping it goes in," Denham said when asked about her jump shot. "When I release it, I can always tell. When it feels good, I just want the ball back."

In their second home game of the year, the M-ettes were intense on defense, bringing overwhelming pressure throughout the first half.

"We came in thinking we didn't want to get two losses in one weekend," Denham said. "We were pretty upset about that (loss to Glasgow), so we came in wanting to get the win."

She went on to say that her team played pretty quick on their feet that night, going after every pass.

Kunze has been one of Malta's leading rebounders on both sides of the floor, and she was asked about her efforts in the paint.

Sophomore Alba González Palou of Spain, an exchange student, scores her first American varsity points on a layup during Malta's win over Shelby.

"I started off in the third grade playing the post, so I kind of just go in and do everything I can despite being so small," Kunze said.

In their loss to Glasgow, Malta was outscored 19-5 in the first quarter and 16-3 in the fourth quarter.

Malta was led by Addy Anderson, who scored 10 points off of the bench. Nelson had eight points and five rebounds. Kunze had six points and seven rebounds, Denham and Erica Smith each had five points. Smith had a game-leading three steals.