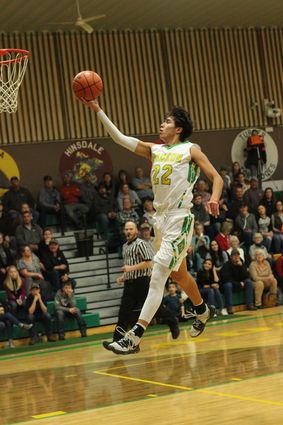 Corbin Lonebear goes up for a finger roll in the Coyotes' win over North Country in Dodson last Saturday.

The Dodson Coyotes and North Country Mavericks boys basketball clashed for their second meeting of the season, this time at the Coyote Den in Dodson on Saturday, February 8.

"It was a physical game," Dodson Head Coach Frank Benson said. "Most of these guys play football with or against each other and they are used to pushing each other."

Both teams lost their games prior to meeting each other with Dodson losing to Roy-Winifred 52-47 in Roy on Thursday, February 6, and North Country losing 60-29 to Scobey in Hinsdale on Friday, February 7.