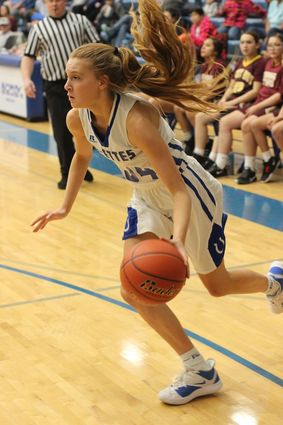 M-ette freshman Allie Kunze drives to the hoop in an earlier game.

Despite dropping their last two games of the regular season, the Malta M-ettes have already punched their tickets to the Northern B Divisional by way of their 5-3 district record.

The Malta High School Gymnasium is set to host the 2020 2B District Tournament this weekend, as Glasgow, Harlem LadyCats, Poplar, and Wolf Point come to town.

The M-ettes ended the regular season as the third seed team in the 2B District, a district in which teams need to place in the top three to automatically qualify for the Northern B Divisional Tournament.

Coach Nate Hammond knows how important it is to win th...