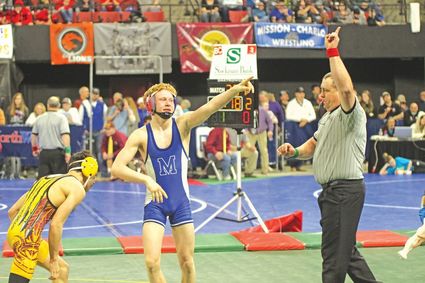 Malta freshman Cameron Mikesell points to the Malta crowd after his victory over Poplar's Jase Frederick to take third in the 113-pound weight class at State last Saturday.

The Malta Wrestling team saw its first State B championship bout since 2014, as senior Callan Mears qualified and wrestling for the 160-pound title on Saturday, February 15, in Billings at the Rimrock Arena.

Mears would fall in the championship to Rylin Burns of Colstrip, taking second place in his weight class, while freshman Cameron Mikesell took third place in the 113 class and freshman Camryn "Reggie" Mears took sixth in the 145 class.

"Between divisionals and state, I think we wrestled our best the whole year, so I couldn't really be happier," Malta Head Coach Steve French said.