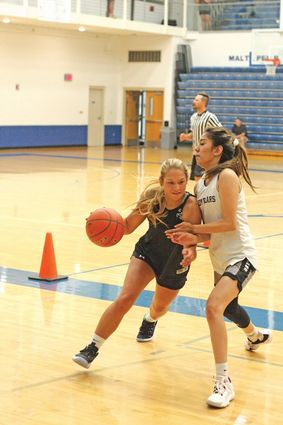 Jaycee Erickson drives to the hoop in the 2020 Malta Summer Shootout. Photo by Pierre Bibbs.

Denham shared how the event was started back in 2011.

"Kendall was going to be a senior, and I had mentioned to his coach Dave Costin that we should do an event here in Malta," Denham said. "We always travel all summer and we have one of the nicest gyms."

Though many of the local coaches didn't have a chance to do the first event including Coach Costin, Moe and various assistant coaches and a few head coaches came together for the event.

"It just kind of snowballed from there," Denham said.

This year has given the world a different type of situation with COVID-19. After not having the game of basketball available until open gyms were approved a few weeks ago, teams have had to stay put. Fast-forward to about a week ago, the Malta Summer Shootout had to turn away teams for the first time in its history, even after adding an extra day to the event.

"We just don't have room," Denham said. "Like today, (Saturday), we are going from 8 a.m. to 9 p.m. straight through. It was going to be Saturday and Sunday but we added a day to it." 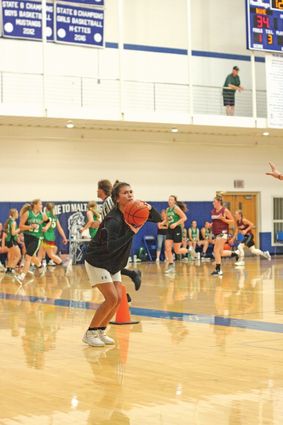 Melony Fetter squares up for a three-point shot in the 2020 Malta Summer Shootout. Photo by Pierre Bibbs.

"I think it's great," Denham said. "With the COVID stuff, we have got a lot of parents, coaches, and kids who want to get out there and play basketball."

Denham said that this year he had received more calls than any other previous year.

Coach Amber Erickson has been at every Summer Shootout since it started, and her team, the North Country Mavericks, turned a few heads, going 4-0. They defeated Box Elder 50-22 on Saturday morning.

"There are always good teams here to play," Coach Erickson said. "What I like is that we get to come here and we get to play teams that we don't see. That's fun because it is nice to play a team that you don't play all of the time."