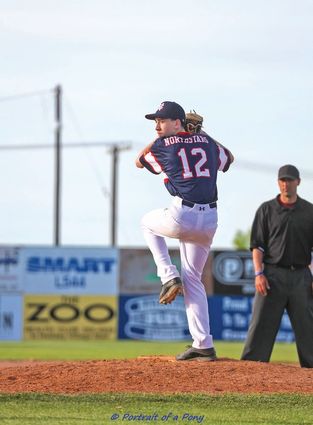 Dodson's Juliun Benson pitched a shutout during the Havre Northstars 5-0 win over Lewistown. Photo by Carol Gabrielsen / Portrait of a Pony.

Dodson's Juliun Benson did something that can't be said of a Phillips County baseball player in a long time; he pitched a 5-0 shutout for the Havre Northstars against Lewistown on Tuesday, June 30.

The American Legion baseball season had been canceled for Malta because the team didn't have enough players, but that hasn't stopped Juliun and his older brother Jeramiah from traveling to Havre to play ball.

"They are most experienced because they play baseball more than the kids in Malta, but it has been pretty fun," Ju. Benson said.

The Northstars have played close to 20 of their 40 games this...