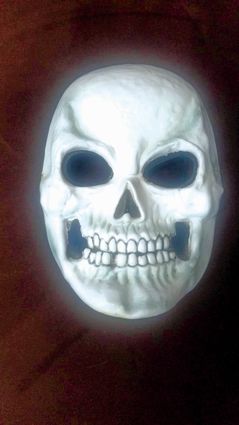 Villa Theatre owner Greg Kirkwood and staff found this 1960's Halloween mask when renovating the movie house's marquee earlier this year. It will appear in the theatre's lobby this month. Courtesy photo.

When The Villa opened its doors on October 2nd, they did it knowing that they could keep them open for the entire month thanks to some generous local businesses.

"We had just been throwing around the idea of asking businesses to sponsor tickets like the pool did this summer when Katie Brown called and said the RCAN wanted to sponsor 15 tickets and challenge other non-profits and businesses to do the same. From there, it just spread like wildfire, the next thing we knew, each showing in October had a sponsor," said manager Angel Kent.

While it doesn't totally relieve her anxiety for the fu...