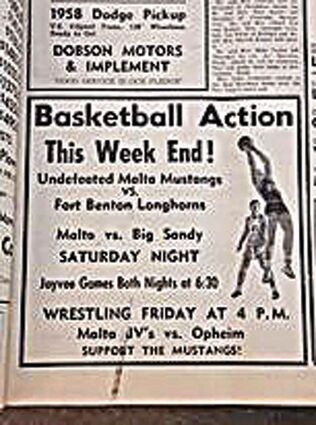 An Advertisement from the January 7, 1971 issue of the Phillips County News.

At least three oil drilling rigs were expected to start operations on the Bowdoin dome in the spring.

Directors of the First State Bank held their annual meeting reelecting H.W. Robinson, president. B.M. Phillips was elected vice president to fill the vacancy created by the death of Dr. G.W. Clay and Iver Rood was elected cashier. C.E. Seacrest was elected to the board of directors.

D.L Partridge was injured when he fell from a loaded ice wagon.

Nearly Half As Many Divorces as Marriages In 1945