Mustangs run past Panthers in Malta 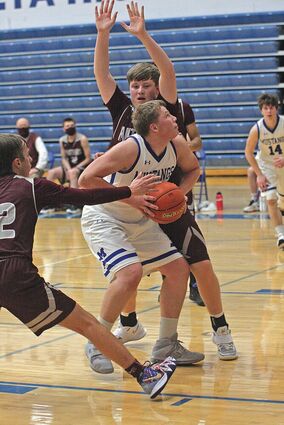 Senior Pierce Mortenson goes up for a lay up. Mortenson scored 13 points in Malta's win over Roundup last Saturday. Photo by Pierre Bibbs.

After the game, senior co-captain Kooper Oxarart was asked how it felt to play a home basketball game given current events.

"It's exciting," Oxarart said. "Just to be able to get back on the court with my friends and my team. It was a fun game. I'm glad we are back and that we are able to have a season."

The Mustangs defeated the Panthers 67-39 after the team stifled Roundups offense in the first quarter of the game. Malta scored 24 points while Roundup only scored two fiel...