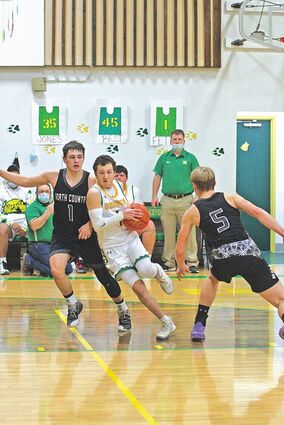 Michael Jaynes drives into the paint for a layup against North Country last Thursday in Dodson. Photo by Pierre Bibbs.

The Dodson Coyotes and North Country Mavericks met up in Dodson last Thursday, February 4. Those in attendance at the Coyote Den witnessed a 57-52 nail-biter, as the hometown Coyotes won.

"I knew that was going to be a good game because that team is good," Dodson Head Coach Frank Benson said.

In Dodson's win over North Country, the Coyotes were led by Zare...