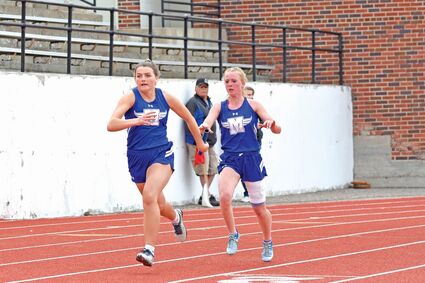 Malta M-ettes Maddie Williamson and Leslie Young run in the Short Relay at the Fairfield Belt Invitational last Saturday in Great Falls. The team placed third in the event. Photo by Nick Oxarart.

The Malta, Dodson, and Saco Track teams participated in the Cal Wearley Memorial Track Meet last Tuesday, April 27, in Havre, and three of six teams placed high in the meet which featured over 20 schools.

The team also went to Great Falls for the Fairfield Belt Invitational on Saturday, May 1.

The M-ettes placed highest amongst Phillips County teams at the Cal Wearley, placing second in the girls' meet with 59 points. The Saco Lady Panthers weren't too far behind, placing fourth with 46 points.

The Mustangs were the only Phillips County Team to score in the boys meet, finishing sixth with...