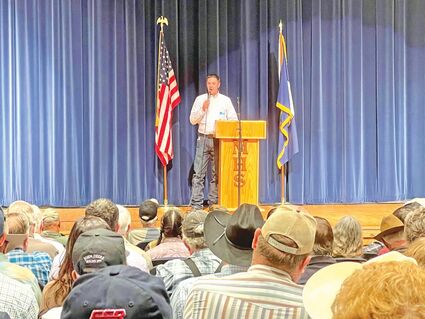 Montana Attorney General Austin Knudsen stopped by the Malta High School Auditorium last Wednesday, September 15, at 6 p.m., to give citizens a chance to comment on a grazing issue that involves Bison, the American Prairie Reserve, and the Bureau of Land Management.

The PCN caught up with Montana AG Knudsen after the event.

"It went great," Knudsen said. "We had a huge turnout, way bigger than we expected."

The event which held over 250 concerned citizens gave those in the farm and ranch community a chance to voice their concerns over a recent proposal sent to the Bureau of Land Management by the American Prairie Reserve that would allow for Bison to graze for the APR's Bison project on BLM land all-year-round.

"Whenever there is a proposal like this through the Bureau of Land Management, there is supposed to be a comment period," Knudsen said. "I think that technically BLM did that and it was dominated by out-of-staters, which is fine because those people have the right to comment as well, but under the Administrative Procedures Act and Federal Law, the locals are supposed to be weighted pretty heavily too."

Knudsen said that many felt like the voices of the locals were not heard, and because of that, Knudsen and his team took off to Malta to host a listening session, which will be added to the BLM's ongoing commenting period, which is set to end on Tuesday, September 28.

Knudsen gave citizens from Malta and surrounding towns and communities a chance to voice their concerns by microphone that day, by video/audio message, or by pre-addressed blank cards, where people could comment.

According to Knudsen, there were a few that talked on the microphone, and close to 30 concerned locals submitted their concerns, mostly by pre-addressed card.

"Those went like hotcakes," Knudsen said. "That seemed to be the preferred (method)."

Growing up in Culbertson, Knudsen grew up ranching, so showing up to Malta to hear the concerns of fellow ranchers was on the top of his agenda.

"We left Helena expressly for this," Knudsen said. "We came here to do this."

By holding the session, Knudsen said that he and his team learned some concerning things that even his team was unaware of.

He stated that under the Taylor Grazing Act, which was signed into law by Franklin Delano Roosevelt, livestock has priority on federal lands.

"That does not include Bison," Knudsen said. "There are some provisions in Federal Law that allow for Special Permits for small numbers of Bison, but it looks as though, internally, the Bureau of Land Management has either, A., decided to ignore that, or B., do an internal rule change."

As far as the event at MHS, AG Knudsen said that the energy of the crowd was calm, and he had hoped to keep it that way.

To his knowledge, there were no APR supporters in the crowd.

"I was a little surprised at that," he said. "I thought that we would see some APR presence or BLM presence, but we didn't."

Knudsen said that his next stop would be to KMMR-Malta, and then to Glasgow, close to Knudsen's old Legislative District.

"My office, we are going to wait and see what they do after the (September 28th), what they come up with before we ready, aim, fire," Knudsen said. "We are looking at this one very closely. This issue has got our full attention at the Department of Justice."