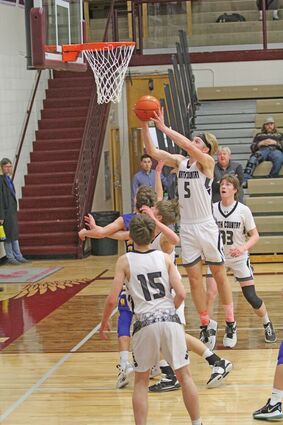 Maverick Senior Trey Johnson goes up for a layup during the 2022 Eastern C Tourney. Photo by Heidi S Johnson.

The North Country Mavericks basketball team's 2021-22 campaign came to an end last week after the team fell 78-44 to the Scobey Spartans in the first round of consolation games at the Eastern C Division Tournament last Thursday.

The Mavericks fell to the Fairview Warriors 56-41 in the opening round of the Eastern C on Wednesday, March 2.

In North Country's loss to Fairview, the Mavericks were led by Aiden Albus who had 15 points. Johnson added 10 points to the effort. Downing had eight points. Mogan had four points. Boyman and Strommen each had two points.

The Mavericks kept pace with Fairview in the first quarter, matching the Warriors with 12 points. The Mavericks did not score a point for the first five and a half minutes of the second quarter, giving up a 17-0 run to Fairview during their drought.

North Country was oustcored 13-9 in the third quarter but gained a little ground in the fourth quarter outsourcing Fairview 16-11.

Johnson led the Mavericks in their loss to Scobey. Johnson had 21 points, five rebounds, and two steals.

Albus had 20 points, three rebounds, and one steal. Strommen had two points, and Downing had one point.

Scobey jumped ahead 27-13 in the first quarter. North Country and Scobey both scored 17 points in the second quarter. Scobey outscored North Country in the final two quarters, 16-9 in the third quarter, and 18-5 in the fourth quarter.