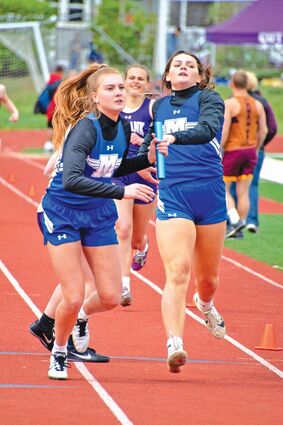 Allie Kunze takes the baton from Madison Williamson in the long relay at the Northern B Track Meet last Saturday. Photo by Amy Beck.

The Malta M-ettes took second place as a team in the 2022 Northern B Divisional meet in Great Falls.

Malta won the meet the last two years, but the team also graduated Erica Smith, who accounted for over thirty points, and is without Lauren Tuss, who also scored points.

"It is still rewarding to get second and see all of them do well and place," Malta head Coach Kaitlyn Smith said.