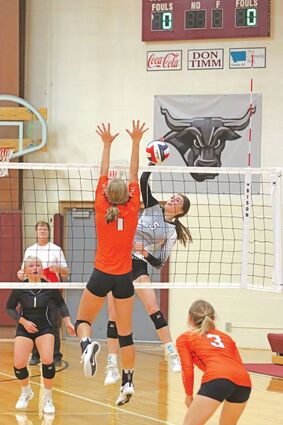 Paige Wasson goes up for an attack in North Country's win over Savage last Saturday in Hinsdale. Photo by Pierre Bibbs.

The North Country Lady Mavericks volleyball team is now at 5-0, thanks to the wins that they picked up last week.

The Mavs defeated the Bainville Bulldogs 3-1 on Friday, September 9, in Bainville North Country was then tasked with a double-header in Hinsdale, which originally was scheduled to start in Hinsdale with a match against the Savage Warriors and end in Saco against the Fairview Warriors.

After discussion amongst the athletic directors, the teams all played in Hinsdale. The Mavericks fell behind 0-2 to Savage but won the last three sets. North Country then defeated Fairview 3-1.