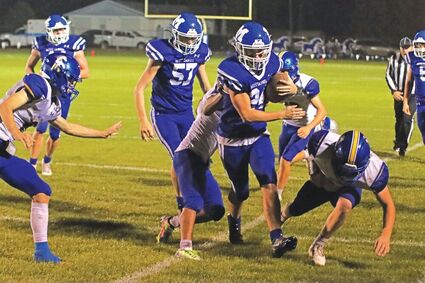 Despite their homecoming game starting an hour and fifteen minutes later than anyone could have expected, the Malta Mustangs defeated the Shepherd Mustangs 24-19 late last Friday, September 17, in Malta.

The game was meant to celebrate Malta's 100th Year Anniversary, but a lightning storm followed by hours of rain, put a damper on a team photo that would've included current and former Mustang Football Players after the game. The photo is now set to take place this Friday, September 24, after the Mustang's game against Wolf Point.

In Malta's win over Shepherd, the Mustangs were led by senior...