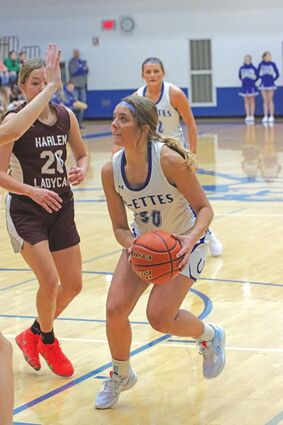 Senior Addy Anderson gathers the ball for a jumpshot in an earlier game in Malta. Photo by Pierre Bibbs.

The Malta M-ettes basketball team suffered their first loss of their 2022-23 campaign to the defending Class A Champion Havre Blue Ponies last Tuesday, December 20, in Havre.

Havre outscored the M-ettes 39-22 in the first half of their meeting last Tuesday. Though several things went right for Malta including winning the turnover battle, the team struggled to shoot from the field making only 19-of-56 (33%) of their shots. The M-ettes were also 2-of-14 from the three point line.

Malta was led by Allison Kunze who had 17 points, eight rebounds, three steals and two assists.