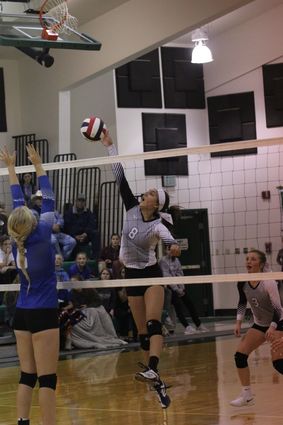 Jaydyn Erickson goes up for a kill during an earlier game in Whitewater.

The 7-5 North Country Mavericks may have a winning record, but the team showed that they have plenty of work to do after falling to the Froid-Lake Redhawks in Froid on Thursday, October 10.

The Mavericks were led by Kaitlyn McColly who had 16 kills, 13 digs, and one block. Kia Wasson had 12 kills, 12 digs, and three aces. Mattea McColly led in blocks registering two of the team's three blocks. Danika Soper had 15 assists. Jaycee Erickson had twelve assists.

"We were up on the Redhawks six points in the first tw...