Malta's Troop #1429 makes the most of Joe's In & Out opportunity 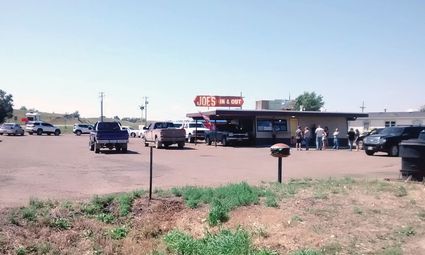 Joe's In & out in Malta turned into the Malta Boy Scouts Troop #1429 burger booth normally seen at the Phillips County Fair in Dodson.

A staple at any Phillips County Fair for many years in Dodson has been the Boy Scout's Burger booth - and all the deliciousness that entails - but ahead of this year's fair, it was decided the Malta Boy Scout Troop #1429 would forgo their fundraiser due to COVID-19 virus concerns.

In stepped Cheyenne and Dwight Score, owners of Malta's Joe's In & Out, to save the day. The couple had planned to take the fair weekend off to let their employees have time off to attend, but when the Boy Scouts announced their departure from this year's fair, the couple hatched a plan: Let the scouts run their booth out of the drive-in restaurant over the fair weekend.

"Cheyenne came up with the idea and we loved it," Troop #1429 leader Mark Knudsen said. "And then, thank goodness, Turk Salsbery (a former Malta Scout) works there now and kept us rolling all weekend."

When the two-day event was concluded, a total of 340 pounds of hamburger, 1,020 total burgers, and 520 orders of cheese fries where some of the numbers, and favorite items, sold.

"The Friday numbers were within $1,000 of the fair totals from last year," Knudsen said. "Part of that was Anna and Cliff Merriman who bought 25 hamburgers, and 25 cheeseburgers, and then brought them up to the Hi-Line Retirement Center and treated those residents to a meal and I thought that was pretty awesome."

The Score's also paid for all the advertising of the event and donated many food items. Knudsen said that the food sales went so well that they had to turn customers away on Friday night. Troop #1429 has a total of seven active Scouts and most of the members worked double shifts, and many worked more than that.

"I want to really thank the community of Phillips County because the support and turnout was unreal," Knudsen said. "It was like the opening day of Joe's from a few years ago, with people lined-up, it was just awesome. Our hats off to both Cheyenne and Dwight, who is a former Scout and an Eagle Scout."

The funds raised by the Boy Scouts (both the fair burger booth and popcorn sales) are used to send the troop to such events as camp-outs and jamborees. The Malta Boy Scouts attended their summer camp near Lewistown recently and the PCN will publish some pictures from that event next week.