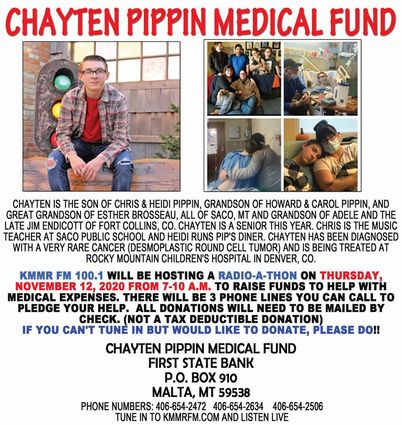 What began as stomach cramps and a suspected case of appendicitis turned into every parent's nightmare for Saco’s Chris and Heidi Pippin on October 22nd. By the end of their son, Chayten’s, appointment in Glasgow, they were on their way for testing at the Rocky Mountain Hospital for Children in Denver. He was admitted upon arrival and was placed on the pediatric oncology floor soon thereafter.

Chayten was diagnosed as having a Desmoplastic Small Round Cell Tumor, a very rare cancer that begins with a cell in the pelvis that attaches itself to an organ. There are under 400 known cases....