He made a wish, and it was granted: An update on Saco's Chayten Pippin

Saco's Chayten Pippin (second from left) is joined by Make-a-Wish Colorado. Pictured are Wish Granter Jamie Castle (middle), and members of the Youth Leadership Council of Colorado, Cami, Elise, and Katie. The program consists of around 50 high school students from all over Colorado. Courtesy Photo.

The past week has been filled with great news for Saco's Chayten Pippin, relating to his fight with cancer.

Last October, Pippin, son of Chris and Heidi Pippin od Saco, was diagnosed with DSRCT (Desmoplastic Small Round Cell Tumors), a rare form of cancer that grows in the abdomen.

Since then, Pippin and his family have lived in Denver, Colo., fighting cancer at Rocky Mountain Hospital for Children, a part of Presbyterian St. Luke's.

Monday, January 25, Pippin, age 18, was able to realize a dream of his; or a wish. He was gifted parts to build a brand new gaming computer by Make-A-Wish Colorado.

"The computer I had before was prebuilt, so I never had the chance to build one," Pippin said. "I thought that it would be a fun activity to do."

His wish was granted by Wish Granter Jamie Castle with the help of The Youth Leadership Council of Colorado.

He admitted that he didn't know the specifications of the new gaming computer, but his older brother Chandler set him up with the latest in gaming technology.

"Chayten's PC has a top of the line AMD CPU, 32 gigabytes of RAM, as well as a powerful Geforce 2080 graphics card," Chandler told the PCN.

Now he can play some of his favorite games like Minecraft and Yakuza.

He made his wish early last November, but due to some of the parts being harder to access, due to COVID-19, Pippin's wish may have taken longer than others. For most wishers, COVID allowed dreams to come true faster.

"I think that meeting a celebrity would've been quicker because I think they do it over Zoom," Pippin said.

During his time in Colorado, Chayten and his family mostly have kept to themselves due to the constant threat of COVID-19. Brothers Connor, Chandler, and Carter have come throughout his treatment.

Since he began treatment, his tumor has shrunk from 19cm x 16cm to 6cm x 4cm as of last Tuesday, January 26.

"It has been shrinking a lot which has been nice," Pippin said.

Even with his fight with cancer, Chayten an honor roll student, who has a 3.5-grade point average at Saco High School.

With the help of his parents, Pippin has been able to complete assignments.

Chayten has a message to those reading his words in Phillips County and beyond.

Chayten is scheduled for two more rounds of chemotherapy, and doctors will determine the best way to treat Pippin going forward. If the tumor continues to shrink, then Pippin will continue chemo, but if the tumor shrinkage hits a plateau, then Chayten has two options for removal.

The first option would be treatment in New York consisting of radioimmunotherapy (a treatment currently in phase 1 of testing), and the second option would be HIPEC, which would consist of hot chemo being swirled in his belly.

"Our doctor liked the idea of us going to New York, but there are a few things that came up in a conversation," Chris said. "If we went to New York, it would most likely be after it stopped shrinking." 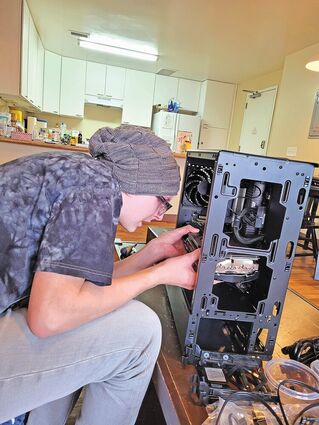 Chayten put together his computer last week and fired it up Monday. Photo by Heidi Pippin.

After talking with their doctor, Chris believes that the window for removal would begin in March, April, or later in the year.

Saco Public School is holding ChayDay on Monday, February 15. Children at the school will be wearing shirts in honor of their support to Chayten.

Local businesses around the Hi-Line have been a part of fundraising for the Pippin Family. Valley Cinema in Glasgow is performing a theatrical production called "Love Letters," free of charge, but donations will be collected for Chayten and the Pippin family. Performances will be on Sunday, February 14, at 1 p.m. and Monday, February 15, at 7 p.m.

If you want to make a charitable donation to help Chayten's fight with DSRCT, monetary donations for the Pippin Family can be sent to the First State Bank of Malta.