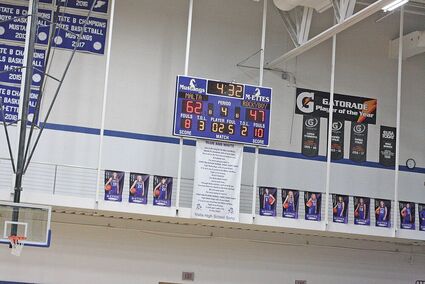 Malta's game against Rocky Boy ended abruptly with 4:32 left in regulation on Tuesday, February 2, in Malta. Photo by Pierre Bibbs.

The Malta Mustangs Basketball team went 2-1 last week, defeating the Rocky Boy Northern Stars in a game that ended with controversy and with 4 minutes and 32 seconds left in regulation last Tuesday, February 6.

The Mustangs would go on to defeat the Roundup Panthers 45-28 on Saturday, February 6, and fall to the Froid-Lake Redhawks 47-44 on Friday, February 5.

In picking up a pair of wins, Malta Head Coach David Costin was proud of how the team bounced back after back-to-back losses to Glasgow and Rocky Boy in late January.

"We just weren't as focused as I would have liked us in those games...