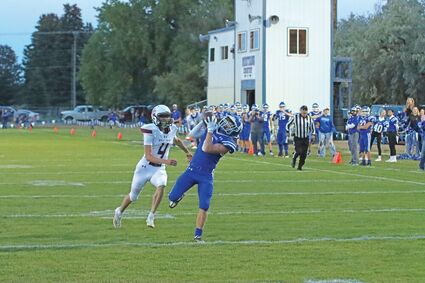 Kyle Darrington had four catches for 132 yards and two touchdowns against Wolf Point. He hauled in this 40-yard touchdown pass from Stockton Oxarart to give Malta an early lead. Photo by Pierre Bibbs.

The Malta Mustangs Football team is now 4-1 after their 24-19 win over the Wolf Point Wolves on Friday, September 23, in Malta.

At the conclusion of the game, the current Mustang football players took a photo with former Mustangs and future Mustangs to commemorate 100 years of Malta Mustang Football. The photograph was supposed to take place last week during Malta's Homecoming game against Shepherd, but the rain and lightning caused a delay that sent most fans home.

The Mustangs will travel to Conrad this Friday, September 30, to face the Conrad Cowboys.

The Cowboys have not won a game in...